What is an Employment Arbitration Agreement? 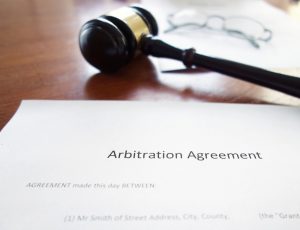 Arbitration is commonly used as a form of alternative dispute resolution (ADR). Many companies rather resolve disputes with employees through arbitration instead of costly litigation in court. As employment class action lawsuits have increased in popularity over the years, employers have started requiring their employees sign an arbitration agreement to prevent them from pursuing any legal action against the employer in court regarding issues such as wages and working conditions. Should an employee have a complaint against the company, it will be dealt with by an arbitrator (a neutral third party) instead of a court or jury.

The decision, Epic Systems v. Lewis investigated the exchange between the NLRA and the FAA. The Supreme Court concluded that because Congress didn’t address the arbitration in the NLRA that the NLRA had no grounds for invalidating class action waivers in arbitration agreements.

Because the nature of this subject is so complex, it is recommended that you work with a professional and experienced employment agency when preparing or modifying similar agreements.

Professional Employers Resources, Inc. (PER) offers numerous services to ensure your business meets federal and state compliance. For more information, or to get started on your partnership with PER, call us today at 888-599-4991.

I really like online services offered by PER, their site is very user friendly. Their staff is always available and ready to take care of all our needs! The PER system and staff make payroll an easy and quick process.